Imagine a day when there are no classes, no work, and no scheduled activities....

So what better excuse can there be to play in my hair and experiment with a low manipulation style?

I had deep conditioned my hair the night before, so in the morning I shampooed and towel-dried my hair. Starting out with the style was hard. I don't usually deviate from twist-outs or braid-outs, so planning a style I would keep for a week was tricky.

I was clueless as to what look I wanted to achieve, but I knew that I would be doing some twists since that's the easiest style I can do. 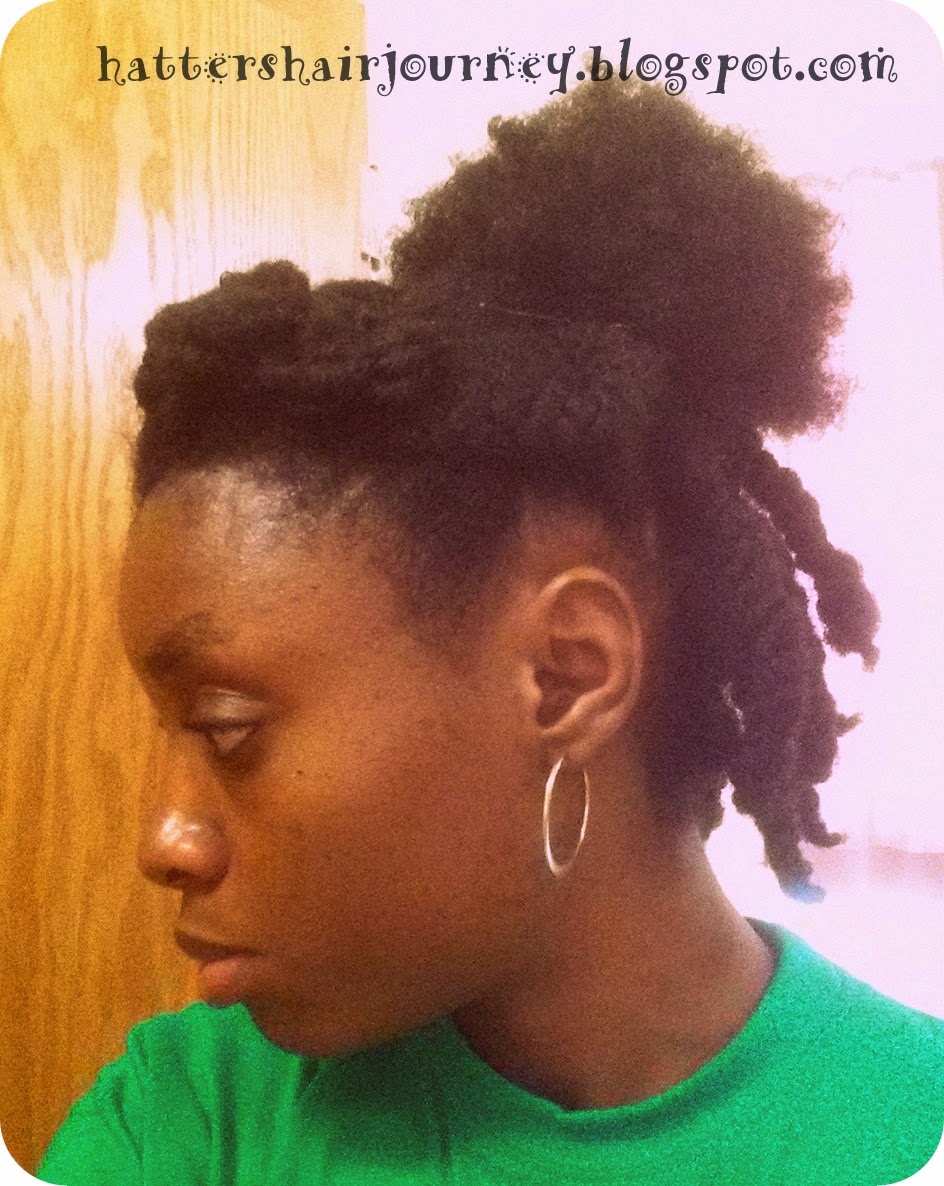 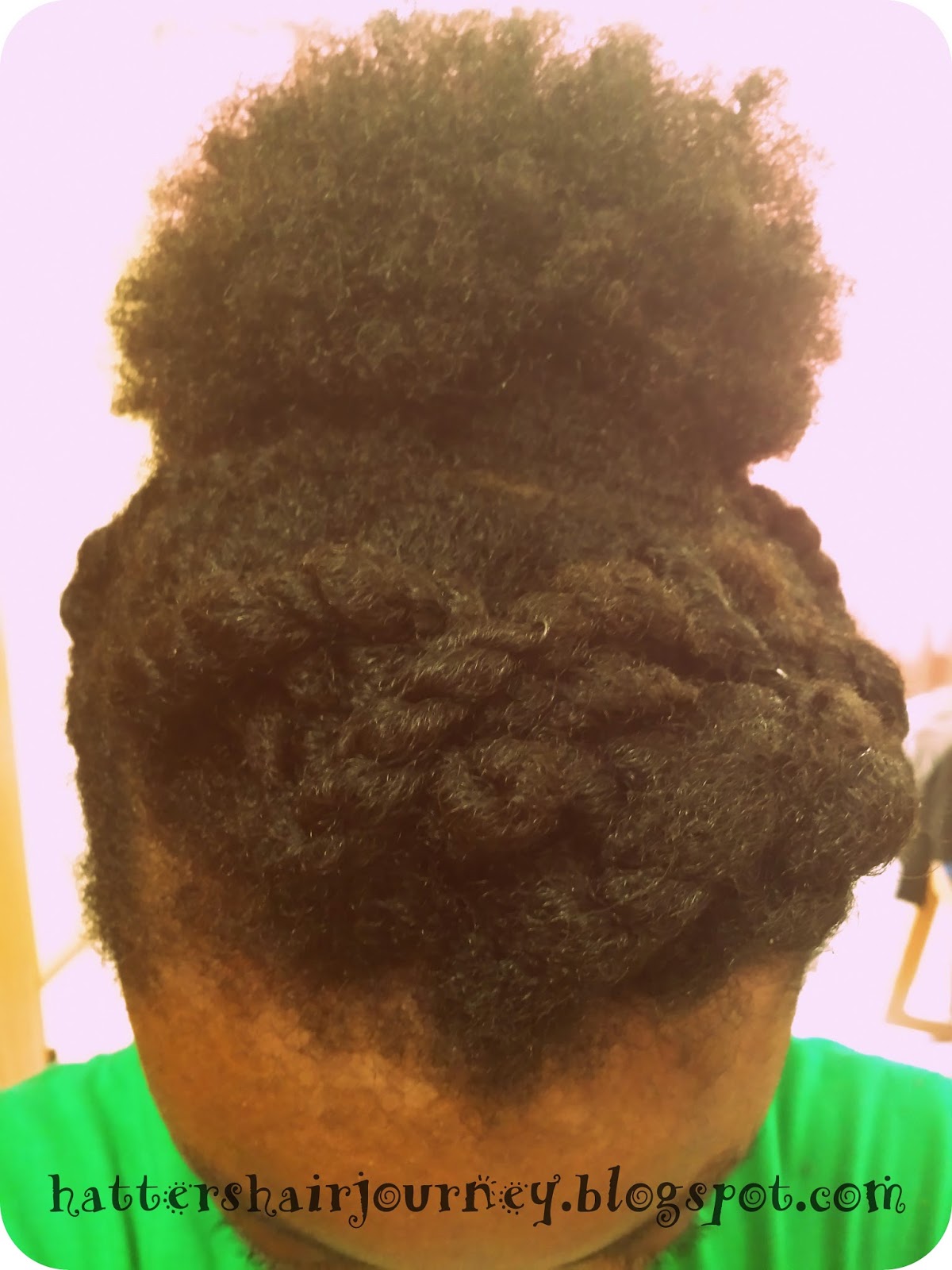 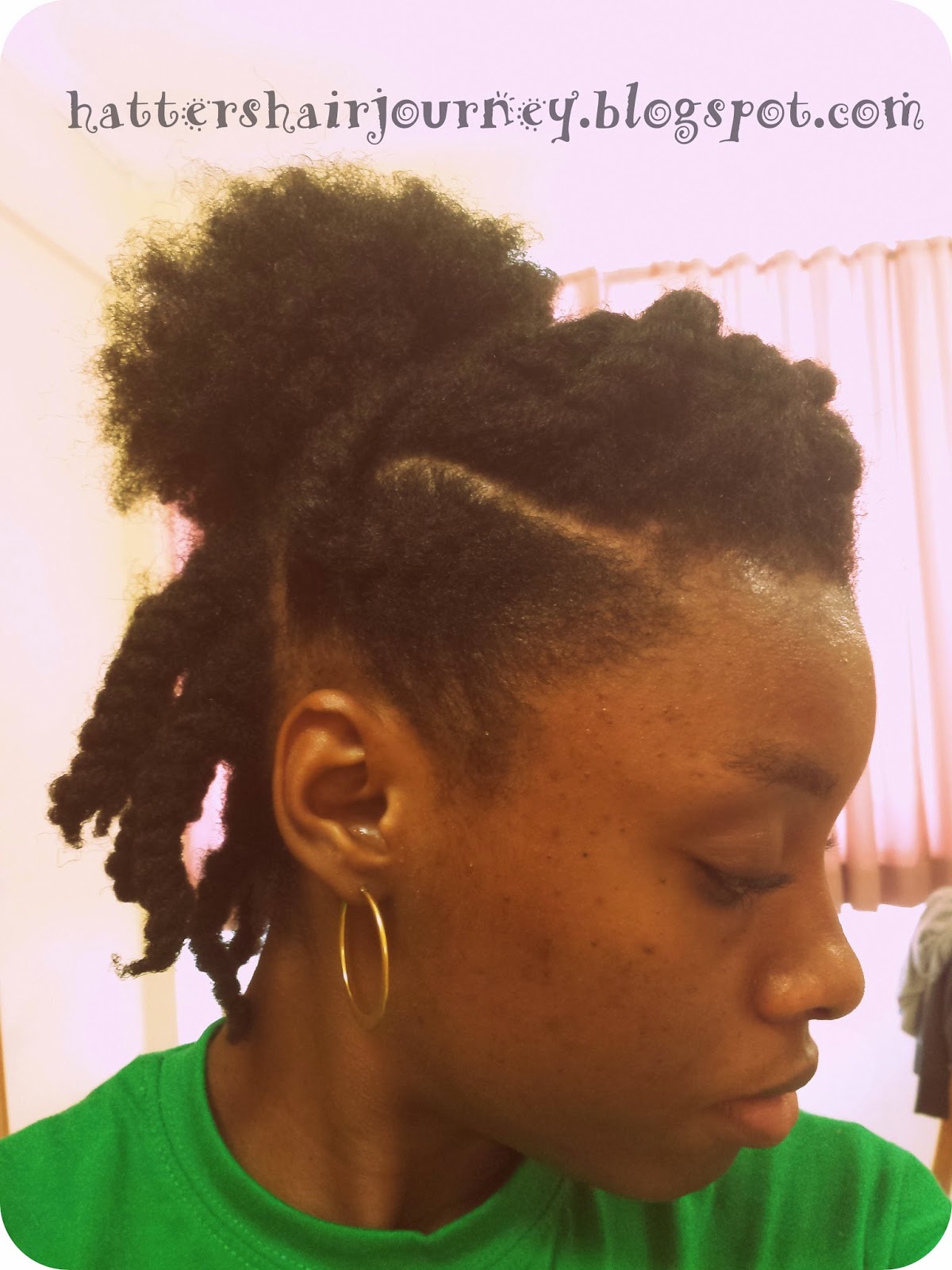 After much fumbling and uncertainty, I ended up dividing my hair into five sections.


Yesterday I slightly altered the look since I took down the ponytail section, moisturized my hair and also put that section into chunky twists. This way, my entire head is in a low manipulation style and I don't have to worry about my crown area tangling during the week.

I'm loving the ease of this style since I don't have to re-style daily. I'm also preferring doing short term low manipulation styles like this one instead of braids. I love braids but I can never keep them looking neat for more than two weeks! o.o I won't even start on how long it takes to install braids.

This style took me about two hours since I wasn't sure what I was doing, but I overtime, the time will shorten as I'll become more comfortable and skilled in doing a variety of hairstyles.

Posted by Janelle Marie at 16:15 No comments:

The Wash and Go on type 4 hair

This Wednesday I did my wash day a little differently.. 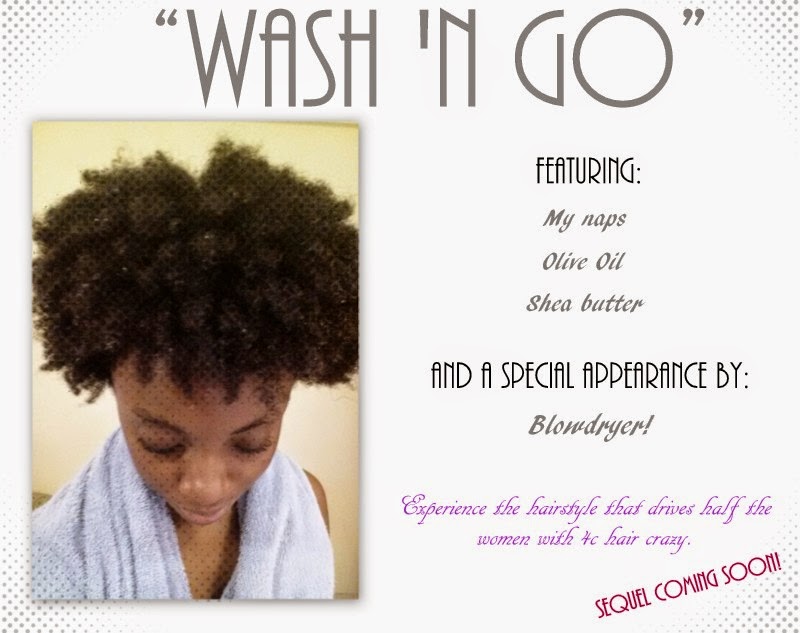 There are sooo many videos and blog posts devoted solely to this hairstyle.
It's been called the "white girl" hairstyle since its modeled after the technique of Caucasian women simply washing their hair and letting it dry with minimal styling and manipulation.

While some women with type 4c hair gush about their successful wash and gos, other women with similar hair type declare the impossibility of achieving it!

Given the split in opinion that, in my opinion, nears controversy over the wash n go on afro hair, I was skeptical about achieving the style myself. However, on a whim I decided to try it.


This was actually the second time trying this hairstyle. Here's what I did:

After blow-drying I love how my hair looked, even though I lost some definition in the crown (where I have the waviest pattern) as my hair became more puffy as it dried.

At the end of the day, however, my hair had dried out quite a bit and felt stiff coarse. It was tedious to go back in section by section to thoroughly moisturize it before I cornrowned my hair.

This is the second time trying the wash and go, and both times I realized I achieved the style with minimal tangles because my ends had been freshly trimmed or I didn't have many split ends that usually cause major tangles. (If you read my blog regularly, you know I battle with tangles and single strand knots!)

My first wash and go was done a few weeks ago, but I had later re-styled my hair much sooner, and my hair didn't feel as dry. So, I know need to re-adjust how I moisturize and seal my wet hair to prevent it from drying out so much at the end of the day.

Technique, plus the state of my ends, seem to be very important in achieving this hairstyle, and I will definitely continue to experiment with the wash n go.


What do you think about the wash n' go?

ORS Nourishing Conditioner in a bottle?? (and other musings)

On Saturday I visited my local Pennywise beauty supply store with no definite intention of buying products; window shopping was the aim of the day.

That is, until my eyes fell casually on the Organic Root Stimulator Nourishing Conditioner............in a bottle! 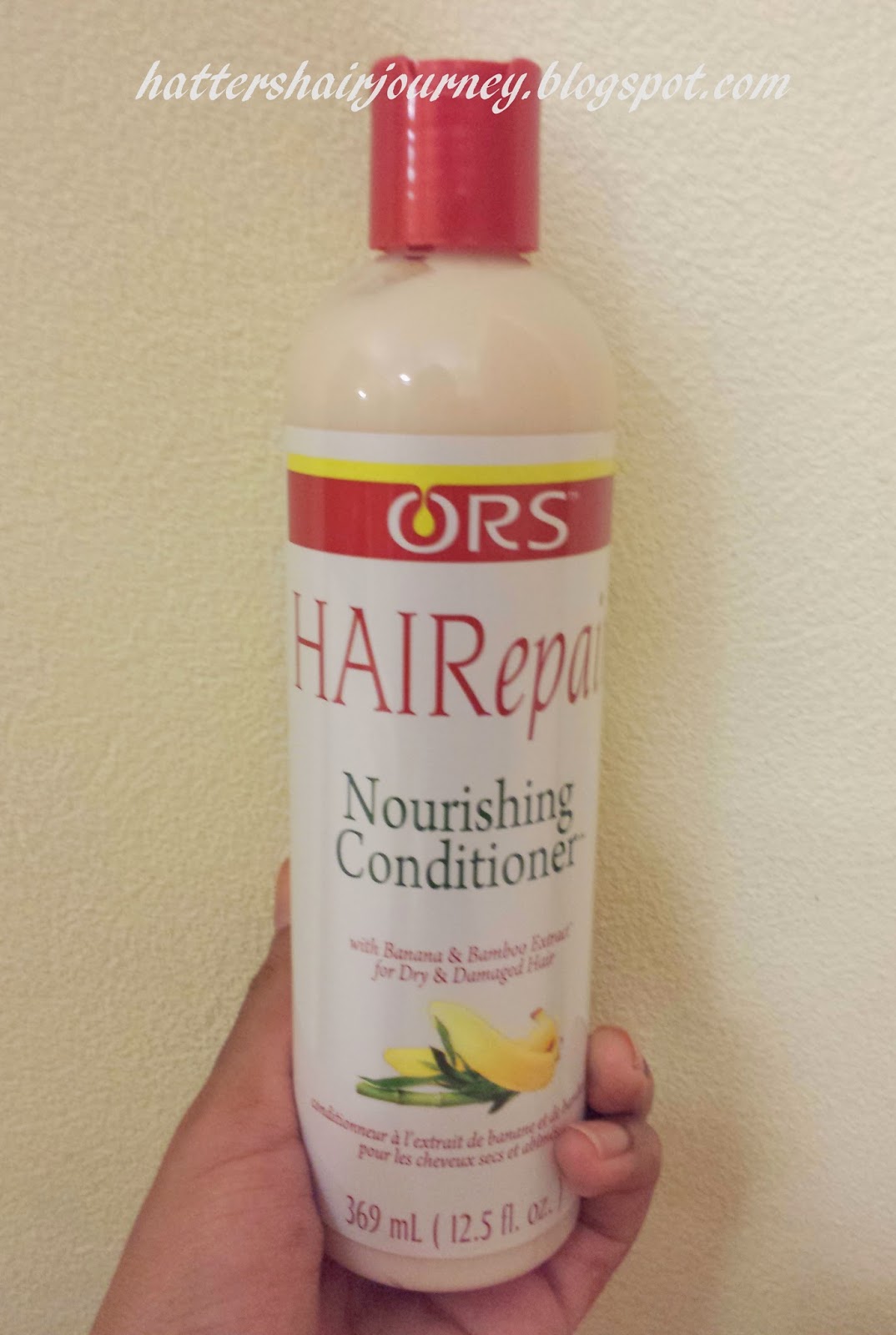 It will suffice to say that I snatched that bottle up, baby!

(Okay, I may be a little late on the scene...but I've only ever seen this conditioner in the sample packets, so excuse my enthusiasm!)

When my hair was relaxed this product was my favourite conditioner; it provided so much slip and softness to my hair! It continued to deliver when I began transitioning to natural hair, and although I've only used it a handful of times since being fully natural, I expect that it will still be a wunder-product for my kinks and coils. 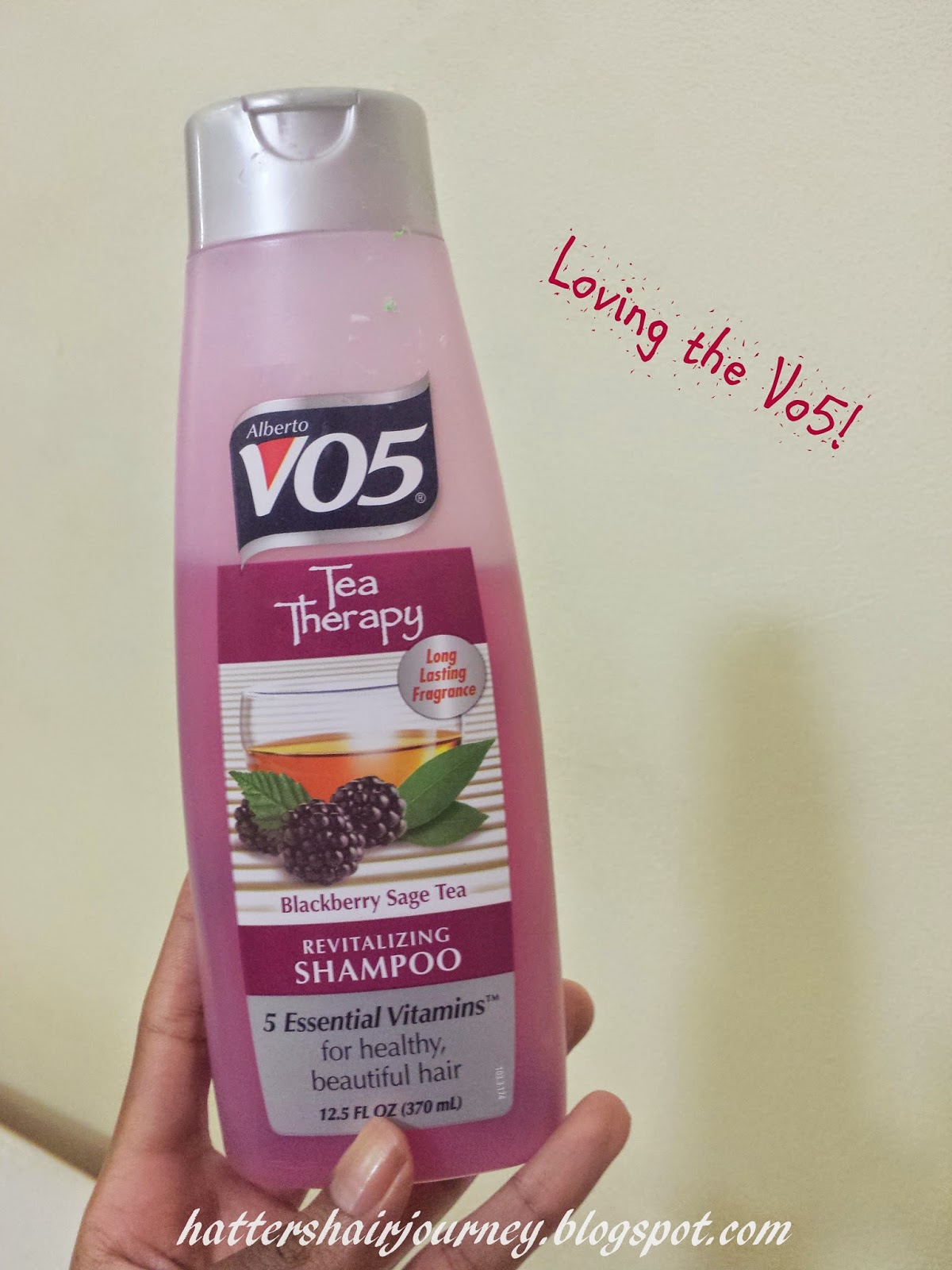 The second product I bought was the Vo5 Tea Therapy Revitalizing Shampoo. I remember reading a favourable review of this product by a hair blogger months ago, so I decided to try it. I've used it once so far and it was gentle on my hair. 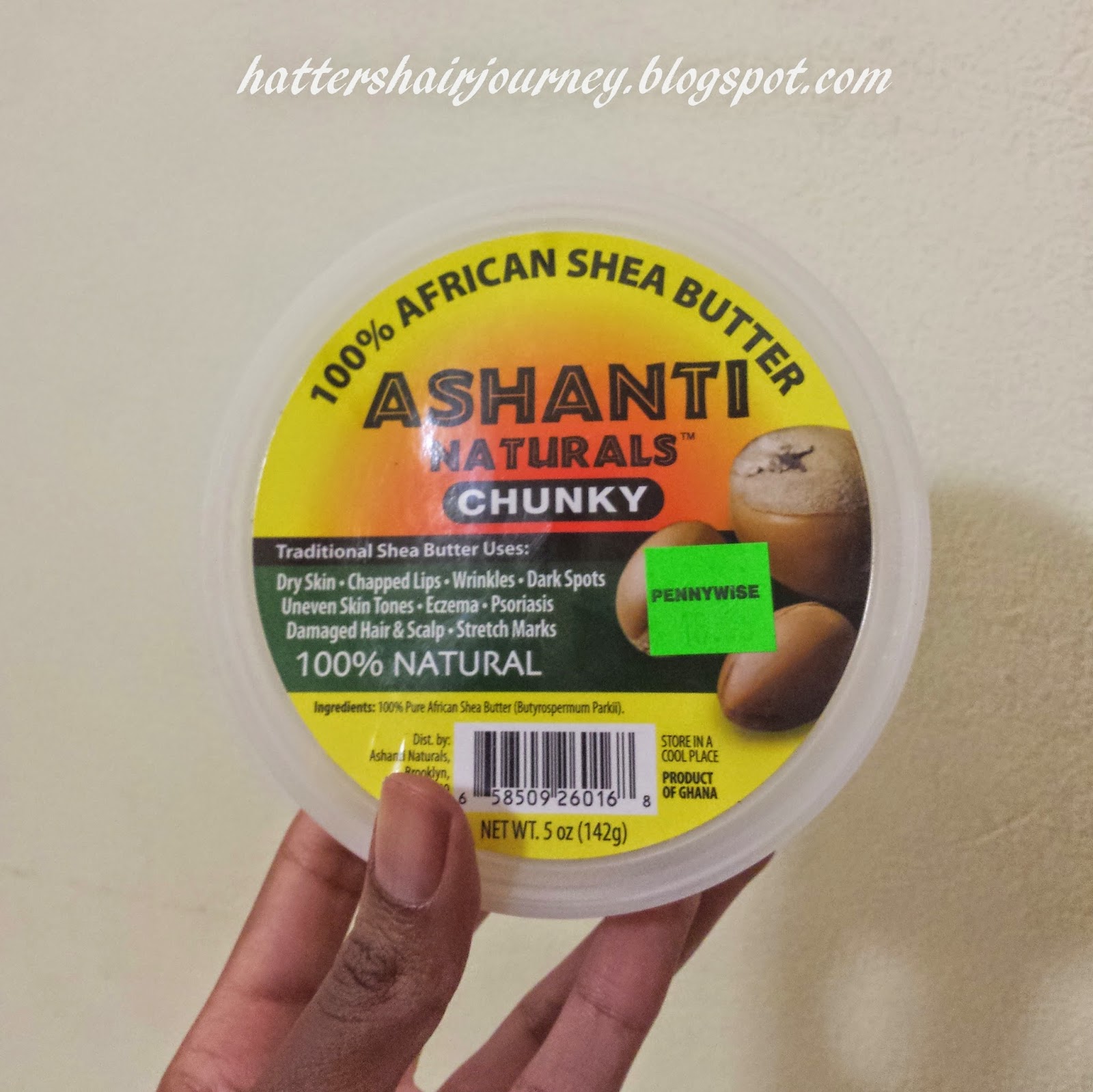 Thirdly, I purchased some shea butter by Ashanti Naturals. The first time I bought 100% natural shea butter it was by "Okay African Shea Butter". I never used that shea butter on my hair because I felt it was waay too sticky and I hate it when my hair feels like glue. I'll be uploading a separate post soon with how I plan to make a homemade shea butter mix for my hair. 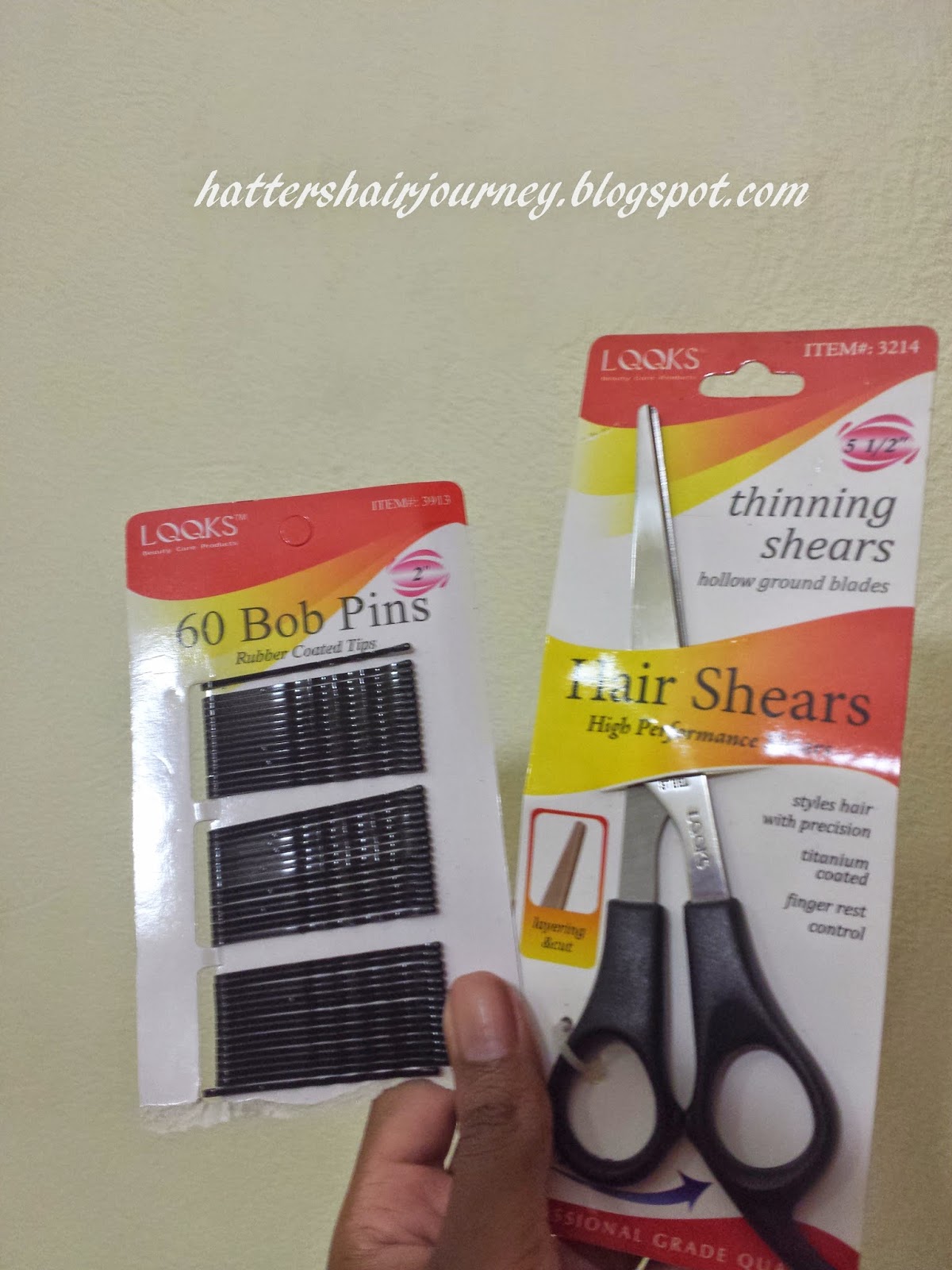 And my new side-kick: hair shears. I loved my first pair but whilst I was travelling it was taken from me in the airport (silent tears may have been shed).


"I don't need these products! I have too many already!!" - said no hair junkie ever.

Posted by Janelle Marie at 19:19 No comments:

Tonight I decided that it was time for a much needed trim. 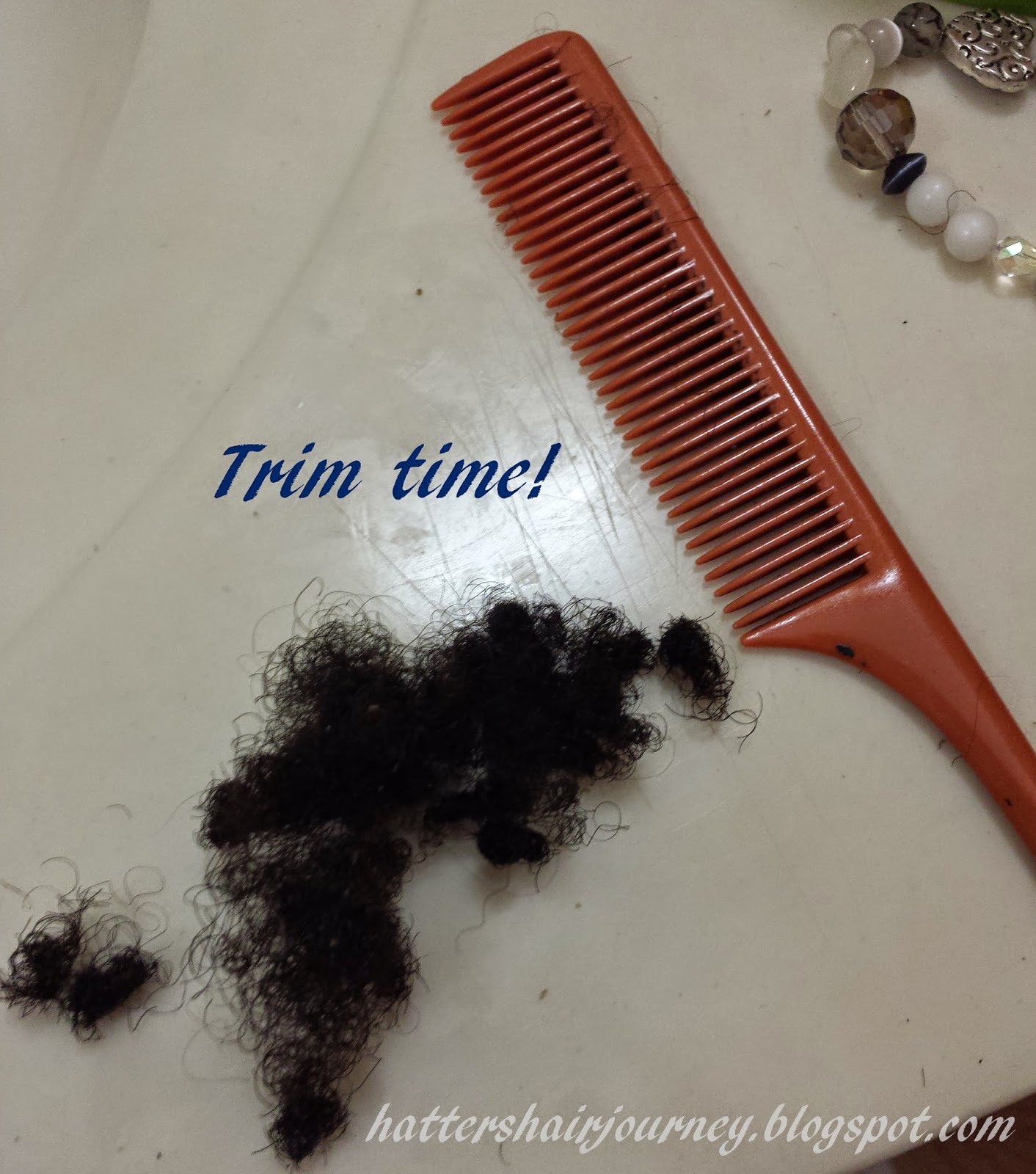 For months now I've been plagued with single strand knots and tangles at the ends of my hair, which I felt indicated that those ends needed to go. My last trim was in seven months ago in February, when I went to a barber shop. Since then I put off trimming my hair myself because I thought it would be waay too time consuming and complicated...

Well, it wasn't complicated. But it did take me about an hour to thoroughly go through my hair section by section!

I previously had my hair in seven cornrows, so as I undid each one, I separated my hair into three to four sections, twisted each section, then cut off the end of the twists from where it was significantly thinner than the body of the twist.


I followed the technique from youtuber jemy1415. You can watch her video below for a visual of what I did.

My twists with fresh, blunt ends after the trim: 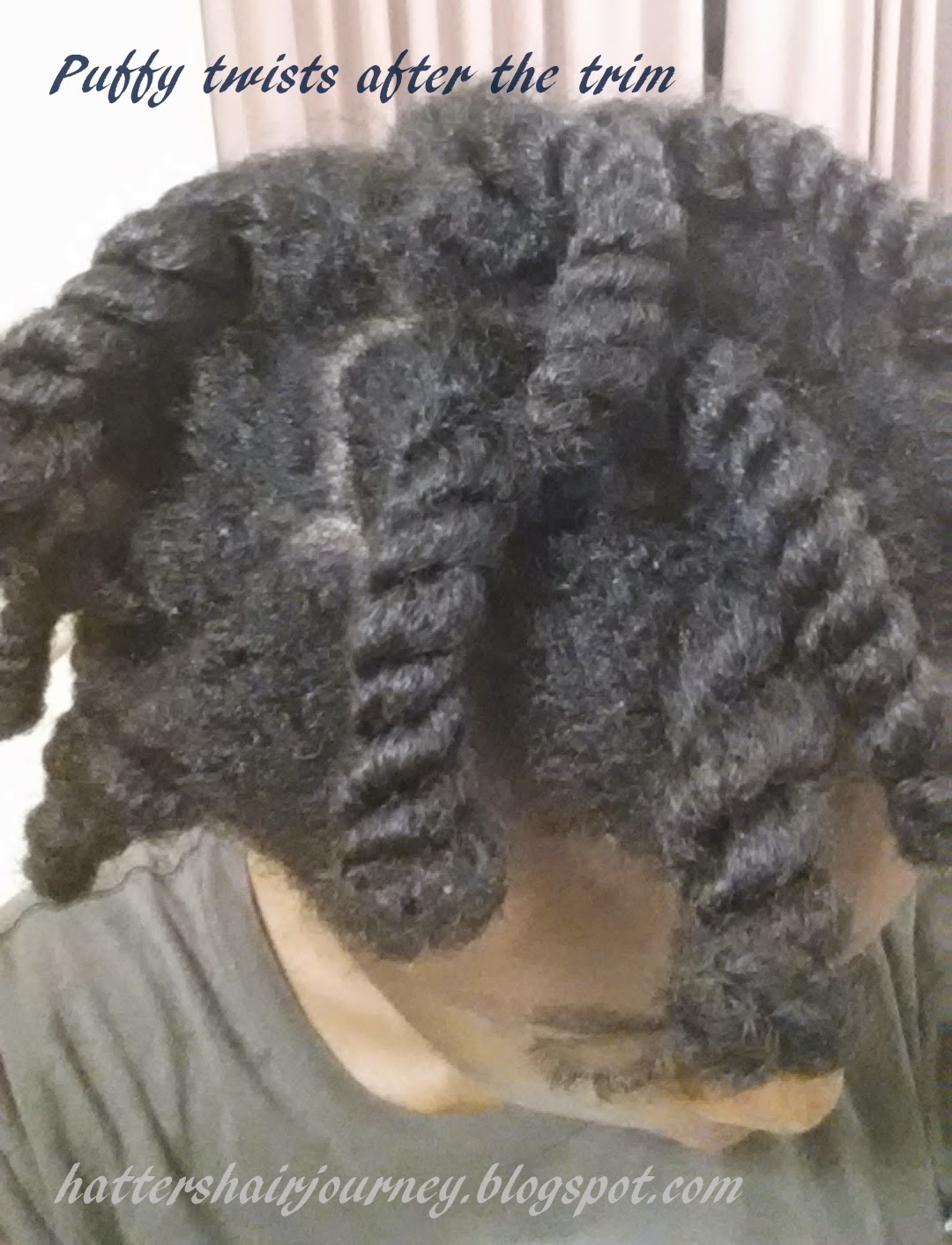 And here is a random picture of what my shrinkage looks like. This photo was actually taken on damp hair, before my trim: 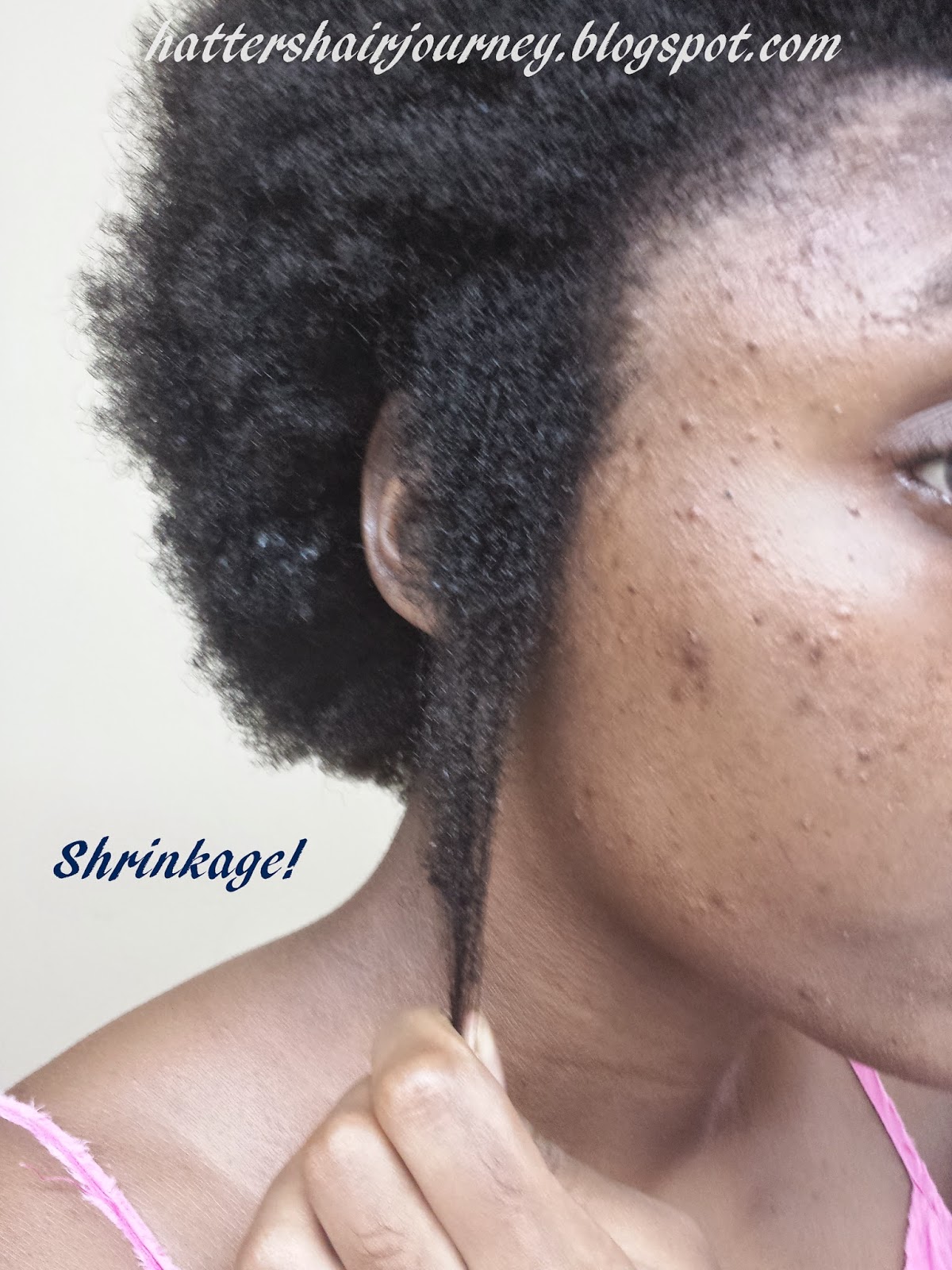 I waited seven long months between my first and second trims. Lets see how long I'll last before the next one!

Posted by Janelle Marie at 19:20 No comments:

Back to Hair! Blog Update

Wow its been six months since my last blog post!

I admit my motivation for blogging did wane quite a bit and I regret the time I spent away from the blogsphere. To be honest, I've settled into the routine of my hair and its not as exciting as when I first big chopped.

So I realize that I need to remind myself why I blog. Well, keeping a hair blog is useful for recording both the struggles and accomplishments with my hair so that over time I can reflect on how much my hair has changed. I can record what products and techniques I find useful or not so useful, and of course there's the opportunity that the information I record here will help someone else, who like me, craves all knowledge of how to care for 4c hair.

So now that that's clarified, on to the tasks at hand. Next week I start classes in my third and final year of university. Of course, I'm excited and nervous about the new semester, especially about my time management skills. o.o

It's a fight, but I really want to devote attention to both my studies and my blog.

Starting with my blog (sorry studies, you have to wait) I plan to update the blog design soon and spam upload more posts as we enter the month of September.

If you had to sum up the last 6 months of your hair journey, how would you describe it?

Hatter is also on...

Janelle Marie
Trinidad & Tobago
Who am I? A hatter. Slightly mad. I started my hair journey in 2011 with the intent to achieve healthier, longer relaxed hair. Now I've transitioned back to natural hair. Wherever I am in my journey, I want to know and feel that I am beautiful- whether relaxed or natural. Hopefully my hard work will pay off and this hatter's hair will look fabulous.